Larry Hess CPA
Albuquerque, New Mexico, United States
I am a Certified Public Accountant in Albuquerque, New Mexico specializing in representing taxpayers who are unable to pay the taxes they owe or being audited for NM gross receipts tax.. I am also a frequent presenter of IRS Small Business Workshops for new businesses and new employers. You can read more articles on my website.

Q.
Why do I have to pay gross receipts tax when my business had a loss after subtracting deductions on my federal tax return.
A.
Gross receipts are sales. Deductions for business expenses are not relevant the GRT.
Q.
Is there a difference in the way gross receipts taxes work for a general contractor and a sub?
A.
Yes. A general contractor's gross receipts are subject to GRT consequently a subcontractor's gross receipts are not taxable -- but they must be reported and then deducted.
Q.
What about a subcontractor to a subcontractor?
A.
A sub-subcontractor's gross receipts are taxable because the gross receipts of the first level contractor are not subject to GRT.
Q.
I am a consultant located in California and have customers in New Mexico. Are my sales to NM customers subject to GRT?
A.
It depends. Until July 1, 2021, if you are an individual or business that lacks physical presence in NM, including a marketplace provider or marketplace seller, engaging in business means having at least $100,000 of taxable gross receipts in the previous calendar year from sales, leases, and licenses of tangible personal property, sales of licenses, and sales of services or licenses for use of real property, sourced to New Mexico. Beginning July 1, 2021 your sales of services will be subject to GRT.
Q.
I sell merchandise on eBay. Do I have to pay GRT?
A.
Maybe. You are a marketplace seller and a marketplace seller may deduct receipts for sales, leases and licenses of tangible personal property, sales of licenses and sales of services or licenses for use of real property that are facilitated by a marketplace provider; provided that the marketplace seller obtains documentation from the marketplace provider indicating that the marketplace provider is registered with the department and has remitted or will remit the taxes due on the gross receipts from those transactions.
Q.
I know I don't have to pay GRT on sales to customers in other states. What type of Nontaxable Transaction Certificate do I need from my customers?
A.
A buyer in another state can only issue NTTCs only if they are registered with the NM Taxation & Revenue Dept. That means they have a facility or employees in NM.
Q.
So how do I prove that I am entitled to a deduction for those sales?
A.
Documents such as billing and shipping records and the Multijurisdiction Uniform Sales and Use Tax Certificate are examples of proof.
Q.
All of my sales are to out-of-state customers. I know they are exempt from GRT. Do I have to report them anyway?
A.
Yes. If you don't report and deduct them, there's a good chance you will be audited. (Read What is exempt from N.M. Gross Receipts Tax?)
Q.
Is the GRT tax rate I pay based on where my business is or my customer's?
A.
There are 2 answers. Until July 1, 2021, the rate is based on where your business is located. Starting on that date the rate will be based on where you ship to or deliver your product or service.
Q.
I'm a contractor. Does that make a difference?
A.
Yes. The GRT rate for a contractor is based on the rate where the job takes place.
Posted by Larry Hess CPA at 1:13 PM No comments:

Yes!  Income from the sale of services is taxed differently in New Mexico than in most other states.

Businesses in New Mexico receiving income from services provided to buyers located within New Mexico are subject to N.M. Gross Receipts Tax (GRT). Income from self-employment is affected. Independent contractor income is affected.Caution: Gross receipts from the sale of services to non-profit organizations and government entities are subject to N.M. Gross Receipts Tax even though those organizations do not have to pay tax on the merchandise they purchase.

If you live in New Mexico and receive income from your services (unless you receive a Form W-2) you are required to register your business with the N.M. Taxation & Revenue Dept., report your gross receipts and pay Gross Receipts Tax.Overlooking this tax can be costly.

Important: The "employer" of the services of an independent will usually be required to send you a Form 1099-MISC and file a copy with the IRS as well. As a consequence the IRS will expect you to file a Schedule C, Profit or Loss from Business, with your Federal Individual Income Tax Return.

Once an audit begins the taxpayer will not qualify for the N.M. Managed Audit law, which is effectively an amnesty with respect to penalties and interest applicable to delinquent tax returns.Also read:
Posted by Larry Hess CPA at 8:19 PM No comments:

How do you distinguish between a business and a hobby?

In making the distinction between a hobby or business activity, take into account all facts and circumstances with respect to the activity. A hobby activity is done mainly for recreation or pleasure. No one factor alone is decisive. You must generally consider these factors in determining whether an activity is a business engaged in making a profit:
You may find more information on this topic in section 1.183-2 (b) of the Federal Tax Regulations.
Additional Information
Publication 535, Business Expenses
Publication 17, Your Federal Income Tax for Individuals
Category
Small Business, Self-Employed, Other Business
Sub-Category
Income & Expenses
Posted by Larry Hess CPA at 8:46 PM No comments:

I have a tax problem with the IRS but I can't afford to pay fees for representation. What can I do?

If you would have difficulty paying for professional representation and your income is less than the amount listed in this brochure, you may qualify for the assistance of the NM Low-Income Taxpayer Clinic. If you are located outside of New Mexico, here is a list of LITCs in other states. 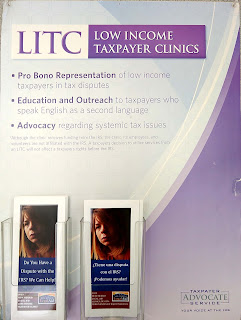 Posted by Larry Hess CPA at 6:48 PM No comments:

Should business owners prepare their own returns?

Preparing one's own personal income tax returns is not necessarily difficult. Many people have straightforward income from jobs and only a few deductions.

Business returns are another story.
I've seen many returns prepared by business owners. A number of them contained mistakes that resulted in larger tax bills than were necessary. The most common is not being aware of what expenditures might be deductible in the first place. Other returns get audited, not so much because of the deductions they took, but in the way the deductions were presented on their returns.
In on case from my practice, Schedule C contained a deduction for office expenses included other types of expenses. The owner used it as a sort a catch-all because they shoehorned everything that wasn't a preprinted line item into office expenses. The result was that the amount of the office supplies deduction was unusually large compared with the business's sales. The IRS noticed this and flagged the return for an audit. While many of the mis-classified expenses were legitimate, the IRS uncovered some that weren't.
In another case involving N.M. gross receipts tax (GRT). In N.M., commissions received by teal estate sales associates are not subject to GRT. Inf act, GRT reports are not even required to be filed. However, the taxpayer used the wrong standard industry code on Schedule C. The code was for a real estate development business.
The N.M. Taxation & Revenue Dept. (TRD) obtains from the IRS gross receipts (sales) and compares that amount to GRT reports. If Schedule C is more than GRT reports the taxpayer gets audited.
Using the wrong SIC code caused TRD to mistakenly believe this was a taxable business that had not reported its GRT. In the end no tax was due. Nevertheless, there were other unfortunate consequences. Understandably, the owner worried a lot about having to undergo an audit. The owner had to take time away from earning his living. And he paid for professional representation. (He could have represented himself; but, that's a topic for another discussion.)

How about sharing your stories of what went wrong because you prepared your own return or the success you had by having your return professionally prepared.

Posted by Larry Hess CPA at 5:19 PM No comments:

Do you owe more tax than you can pay? Is the IRS threatening to garnish your wages or bank account? Do you have unfiled tax returns? Are you being audited?

I represent taxpayers who have problems dealing with the IRS or state taxing authorities. My goal is to get your tax problems under control.